Loam is part of the upper area of the solid earth‘s crust which has been transformed over millennia under the influence of weather, flora and fauna (cf. Schroder 2018: 62). During soil formation, breakdown products of inorganic and organic substances are converted and built up into new components that are characteristic for the […] 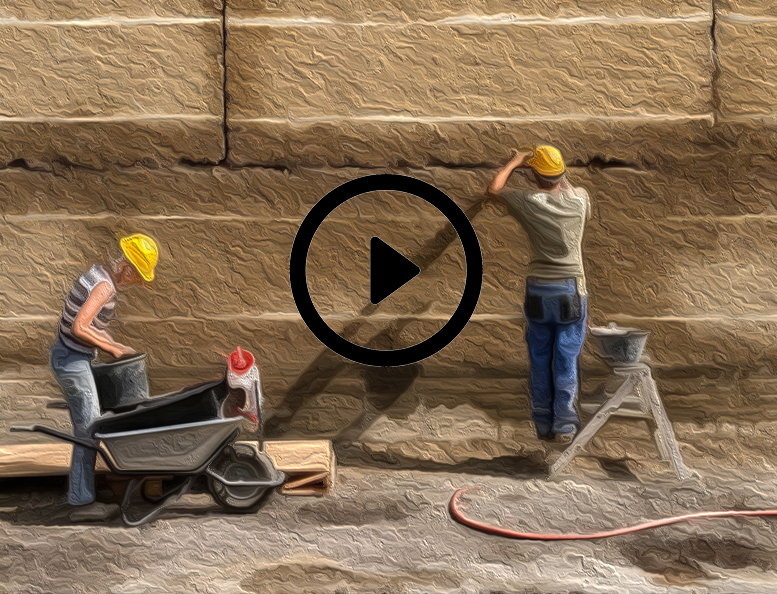 Loam is part of the upper area of the solid earth‘s crust which has been transformed over millennia under the influence of weather, flora and fauna (cf. Schroder 2018: 62). During soil formation, breakdown products of inorganic and organic substances are converted and built up into new components that are characteristic for the particular soil. While the humus-rich A-horizon forms the basis for vegetation and agriculture, suitable building soil can be taken from the lighter colored, humus-free B-horizon. There are four main types of mineral soils: gravel, sand, silt and loam. These main types of soil are mostly mixed, so loams are typical mixed-grain soils. Clay acts as a binding material between the coarse-grained components (gravel, sand, silt). Depending on the clay content, a distinction is made between cohesive and non-cohesive loam (cf. Schroder 2018: 62). Climatic regions and geological foundations determine the different composition and the resulting varying potentials of loam as a building material. But in general, loam is available almost everywhere because the formation process is similar all over the world.

Loam has always served humans as a building material.

10,000 BC, mankind‘s form of food procurement changed from hunting and gathering to agriculture and animal farming. This requires solid dwellings, constructed largely of wood, natural stone and earth. Loam is used either as a solid construction, i.e. in a load-bearing function, or as a skeleton construction in combination with wood. The construction methods depend on the climatic region and given wood resources. These methods can be traced back thousands of years in history worldwide. The first solid house constructions, were discovered by archaeologists, in southwestern Asia, in the areas of today‘s Turkey / Iran. The oldest house constructions made of loam were found in Catal Höyük, today‘s Anatolia (cf. Schroeder 2018: 2). Loam is also a widesused building material in China. Techniques such as the rammed earth construction or the construction with mud bricks have been known here for thousands of years. The Great Wall of China was partly built using loam among other materials (cf. Schroeder 2018: 4).

The annual flooding of the Nile brings fertile mud, which dries to become firm and can then be processed into bricks. Egyptian representations from around 1500 BCE show the necessary steps in the production of loam bricks. The importance of this activity is additionally illustrated by symbolic images. For example, the reigning queen Hatshepsut is shown as a master builder in the production of mudstones (cf. Schroeder 2018: 5-6).     The Tower of Babel (Old Testament, Genesis 11:3) was also built from mudstones. This category of buildings included other large religious structures such as ziggurats as well. They were comparable in size and shape to the Egyptian pyramids and built in the area of today‘s Iran around 1500 B.C. The first written instructions on building with loam date to the time of Babylonian ruler Hammurabi, who lived around 1800 BCE (cf. Schroeder 2018: 6).     Various earthen building techniques were also known on the American continent, e.g. in pre-Columbian Peru.  Several million loam bricks were used for the construction of the Pyramid of the Sun in Moche (ca. 200-500 CE) (cf. Schroeder 2018: 8).     The original earthen building techniques have gotten lost over time. They have been replaced progressively by modern building materials such as concrete and cement. Even in the poorest countries of the global south, the traditional building material loam is being increasingly replaced (cf. Schroeder 2018: 10).     There are different way of how loam can be used as building material. First of all, there are different types of loam to distinguish from.     Soil can either be taken from its natural deposits or used as recycled material that has flown back into the material cycle. Depending on the mineralogical composition, this results in different plastic properties. The raw material loam can be divided into four categories: pit loam, dry loam, recycled loam and compressed loam. Pit loam, a grown geological raw material, can be taken directly from its natural deposits. It can be used in unprofessional do-it-yourself construction, but is mostly used for further processing into other building materials out of earth. Dry loam consists usually of dried pit loam, which is then ground and sold in the form of powder. Dry loam is free from gravel and sand, and it is often used for plasters. Recycled loam is obtained from demolished structures and fed back into the material cycle. Most of the time, the regained building material is crushed and ground before it is used again. Spores or artificial chemical additives reduce the reusability of loam and therefore an effort has to be made to avoid these substances. Compressed laom is a waste product that occurs primarily during gravel extraction and is available widely. For building purposes, it can only be used in tests and experiments, since so far only low stability can be achieved with it.

Normally, loam can be processed into structures that usually base on one of the following loam building techniques: Rammed earth, weller technique, straw loam and loam bricks.